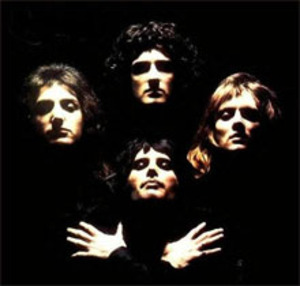 Queen are an English rock band formed in 1970 in London by guitarist Brian May, lead vocalist Freddie Mercury, and drummer Roger Taylor, with bass guitarist John Deacon joining the following year. Queen rose to prominence during the 1970s and are arguably Britain's most successful band of the past three decades.

The band is noted for their musical diversity, multi-layered arrangements, vocal harmonies, and incorporation of audience participation into their live performances. Their 1985 Live Aid performance was voted the best live rock performance of all time in an industry poll.

Queen had moderate success in the early 1970s, with the albums Queen and Queen II, but it was with the release of Sheer Heart Attack in 1974 and A Night at the Opera the following year that the band gained international success. Since 1975, eighteen of the band's albums have reached number one on numerous charts around the world. Since 1973, they have released fifteen studio albums, five live albums, and numerous compilation albums.

Following Mercury's death in 1991 and Deacon's retirement later in the decade, May and Taylor have performed infrequently under the Queen name. Since 2005, they have been collaborating with Paul Rodgers, under the moniker Queen + Paul Rodgers, which has led to Queen recording their first studio album in 13 years.